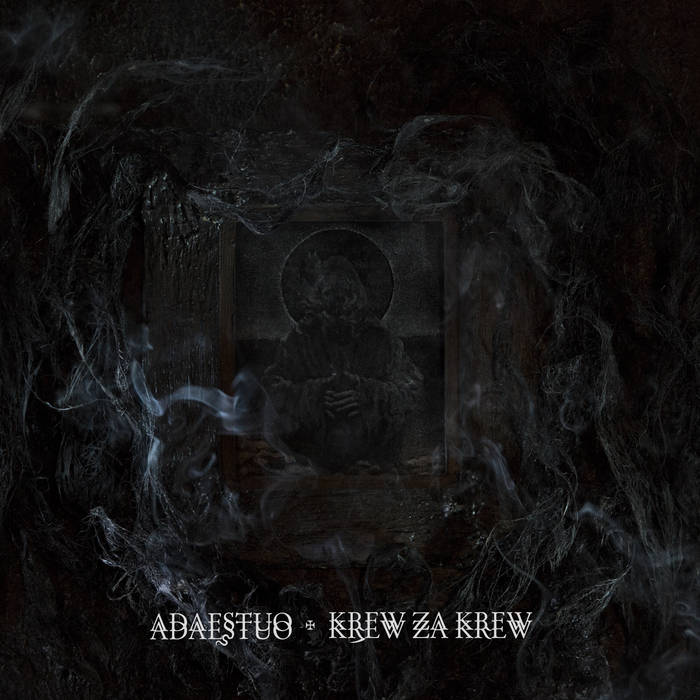 halberdrejoyceth This band is truly well above mediocrity. Nothing less should be expected when the members are associated with the likes of Nightbringer and Sargeist. The vocals are not only fitting the music perfectly, they are also performed by the best female bm vocalist I have encountered yet. This record is mandatory for anyone who likes both ambient and black metal. Favorite track: Death Transition.

Ippocalyptica World Terror Committee continues its incredible quality streak with this release by Adaestuo, which is amongst the most terrifying metal albums that I have heard in a very long time. The black metal songs are sufficiently kinetic and expertly crafted, but the ambient compositions are utterly captivating and fear-inducing. I feel as though this album should have been split into two parts and lengthened, such that a proper full-length black metal album and full-length ambient exploration would result, but life is imperfect, and we do what we can with what we are given. This is property avant garde, and will mess you up if you listen to it at bedtime, which I highly recommend. Favorite track: Monument.

Matthew Toye This is a truly unique experience. Half the songs have the usual black metal fixin's and the other half is more ambient. It's in those dark and dramatic instrumentals where Adaestuo really shines. Can't wait to hear more. Favorite track: Subterranean Fire.

Appearing like a bolt from the blue in 2016 via W.T.C., ADAESTUO's debut EP, Tacent Semitae, was a startling and profound introduction to this otherwise-unknown band. ADAESTUO was formed as a covenant between three wandering souls at the unhallowed crossroads where the darkest elements of ambient, black metal, and spiritual praxis conjoin. Being a series of audial sigils cast by VJS and P.E.Packain and led in evocation by Hekte Zaren, with Tacent Semitae did ADAESTUO transcend the modern homogeny found among the lower caste of musical initiates. Now, the pan-continental trio eclipse that feat with a towering full-length monument titled Krew Za Krew.

To begin to understand the spiritual immensity of ADAESTUO's Krew Za Krew, one need only look to some of the album's English-language song titles for keys to their cosmic creations and times: among them, "Subterranean Fire," "Shadow Pilgrimage," "Death Transition," and especially "Transcendental" and "Monument." Indeed, Krew Za Krew is a transcendental monument, threaded together like a fever dream collapsing in on itself, expanding outward and downward simultaneously. Black metal is undoubtedly the foundational language here, but by no means is it the dialect. The black metal surges and swirls, grimly aware of its inherent power, heaving in its brute physicality, but often disintegrating into nightmarish ambience that's equal parts modern classical, musique concrete, and nuclear fallout...only to be rebuilt again, back into blacker metal.

It's this very duality that renders Krew Za Krew a work of actual artistry rather than pale lip-service paid to conservative traditions ripe for slaughter: true mavericks embark upon the path, while all others never even see the path to begin with. Which is all to say nothing of the seamless sound layering required to make flesh these disintegrations/implosions/nightmares; the sound itself is a frightening thing to behold, especially when the listener drowns within the headphone experience.

If Tacent Semitae ripped asunder the thin veil between the flesh and The Otherside, then with Krew za Krew do ADAESTUO rein as monarchs within that Otherside. In this fleshly existence, this Planet Earth, these sorcerers rule supreme - behold the sinister spell of Krew Za Krew!