Temple of the Adversarial Fire 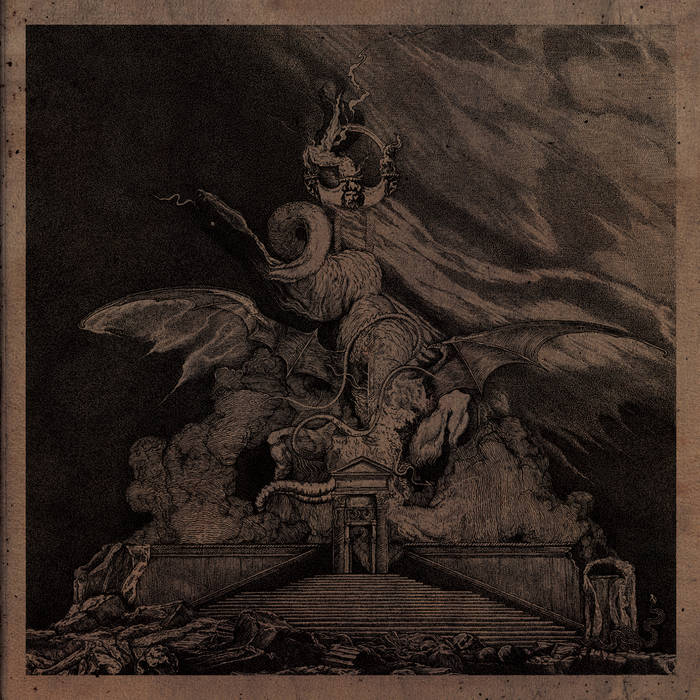 Ippocalyptica Who am I to argue with the bold proclamation of “This is not Music - this is Ritual”? Indeed, this is the only death metal album that I have listened to that can compete with the ritualistic atmosphere of various landmark black metal albums. This is clearly the work of devoted individuals, and they have created a sound that is so much larger than should be expected from three musicians, but then again, they are channeling the essence of a darker dimension here, a fact evident throughout every minute of this beast. Favorite track: Faceless Queen Of Bloodstained Dreams.

The Will to Power

The Will to Power True spiritual black metal. A journey to the deepest, most primal and possibly darkest corners of the human soul. Not suitable for posers! Favorite track: Elevenfolded Wrath Of Sitra Achra.

Stef This is so much better than expected!
It's great from start to finish! It even comes with a nice booklet.

It doesn't get boring and it never feels dragged on. The overall attention to detail is amazing.

𝕲𝖔𝖑𝖑𝖚𝖒𝖌𝖔𝖙𝖍𝖆 I just received my copy of this aural spellbook today! I recommend to anyone wanting to embrace the frequencies within this masterwork to get your own copy, the smell and texture of the paper alone, makes you believe you are truly holding a grimoire or some text of great occult significance. Perfect companion to the unforgiving blitzkrieg of sounds within.

wiebke.rost An album like this is indeed made only once in 10 years. That said, I am hoping for a follow up sooner than that.

W.T.C. PRODUCTIONS is proud to present SHAARIMOTH's long-awaited second album, Temple of the Adversarial Fire. Ever aptly titled, Temple of the Adversarial Fire is a bold and brazen reinvention for this Norwegian trio, fully in line with the band's spiritual beliefs. More than the cliché "phoenix rising from the flames," SHAARIMOTH have stripped down their aesthetic to its barest essentials, and then rebuilt them into an incendiary, black-smoke-billowing monolith of blackened death metal majesty. Rarely in the nowadays metal underground will one hear a death metal record this pure and reverential in its intent whilst being so suffused with the blackest of blood. A glorious new epoch has arrived, and SHAARIMOTH are ushering it in with Temple of the Adversarial Fire.

Formed in 2004 but tracing its origins back to 1998, SHAARIMOTH emerged from the then-barren Norwegian death metal underground, and along with it, so did new incantations of darkness, death, and destruction. Both dark and ecstatic, furious and violent, defying genres, but at the same time paying tribute to its predecessors of the black arts, SHAARIMOTH's goals were firm from the very beginning.

Building upon its unique take of technical Morbid Angel-esque death metal with dark ambient interludes and occult lyrical content, SHAARIMOTH is not music; it is ritual. A sonic vehicle of occult propaganda, created to manifest dark currents by the means of music, the trio worked in earnest on their first public recording. That record, the debut album named Current 11, was released in 2005 via Carnal Records, and dealt primarily with Chao-Gnosticism as approached through the prism of ancient Sumerian tradition. The album immediately became an underground cult, and the status was undoubtedly reinforced through years of worship.

Following the album's release, SHAARIMOTH withdrew from the public eye for many years, only to break the silence now. Hereby, the band announce its inexorable return and rebirth with Temple of Adversarial Fire! The time of the Fire is drawing nearer, and new bonds have been forged in its flames. WORLD TERROR COMMITTEE is the label chosen by SHAARIMOTH to collaborate in the release of their monumental second album, making sure that its incantations will resonate loud and clear, far and near.

Indeed, Temple of Adversarial Fire is a monument: 11 songs in 47 minutes that feel far more vast and expansive than this concise running time suggests. Over that psychic/sonic terrain, the trio canvass a frightening, feral landscape that bridges the terrestrial and the Beyond. It is the blackest of death metal, rendered with the ceremony of a Roman Empire procession, cloaked in sulfur and reeking of brimstone. It is a vision that's limitless, and yet demanding the steeliest fortitude to behold. Are you prepared to bear witness? For SHAARIMOTH is the truth that will burn your world to the ground. Forged in fire and shaped by The Master, SHAARIMOTH is the sound of a thousand raging hearts, the Devil's music manifest.

Music and lyrics by Shaarimoth.
This is not Music – This is Ritual