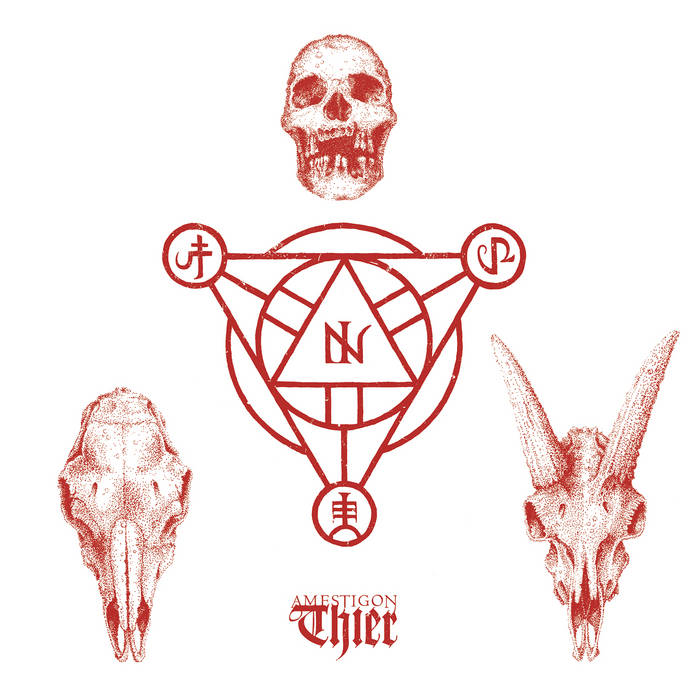 GoatForest This is some epic goodness. Favorite track: 358.

Eli Captures the feel of sognametal. That's really all I have to say and all anyone needs to hear. But I digress, this embodies the mysticism of black metal, evoking Agalloch and Dissection while beautifully moving between the aggressive and dormant styles of both. While influence is heard it is not derivative and therefore Amestigon is able to craft an old school masterpiece while taking a modern approach to their material. Favorite track: Demiurg.

CS This album captures a huge atmosphere and sense of mystery. Great production which releases more with each listen. I don't often listen to albums on repeat but I do for this masterpiece. Favorite track: Hochpolung.

At long last, one of the unsung pillars of the Austrian black metal scene returns to reclaim their throne: W.T.C. PRODUCTIONS proudly presents AMESTIGON's monumental second album, Thier. A sprawling, wholly intoxicating mass of metaphysical might and mystical atmosphere, Thier comprises four vast, void-dwelling expanses of obsidian sound, with each track in the double digits and the title track itself topping nearly 20 minutes. And yet, every second of the way, AMESTIGON weave spells that draw in the listener and literally drowns them with dense, patiently evolving layers of otherworldly decibels wrought from mere strings, synth, and drums.

It's a form of sonic alchemy, one that the band has explored during their on/off career since the mid 1990s, but never have AMESTIGON sounded so potent as they do on Thier. Longtime listeners can cite the album as authentic to the original wave of '90s black metal; however, the band are restless sonic sorcerers and repeating themselves is never an option, so new landscapes of the mind and spirit are sown on this second full-length. From artwork to lyrics to the sound production itself, there is a totality of experience to Thier, and AMESTIGON willingly offer four keys to the beyond. Liberation is yours for the taking.

AMESTIGON was founded in 1995 by Tharen and Thurisaz. Since the release of the first demos, Through the Ages We Preserve... and Mysterious Realms, members of Abigor regularly contributed to the recordings as guest musicians. After releasing the two demos, a split CD with the Austrian folk metal band Angizia, and the MCD Höllentanz, the members of AMESTIGON parted ways, citing personal reasons as well as the lack of a steady lineup. This separation also marked the end of AMESTIGON's cooperation with Napalm Records, who had originally signed the band.

In 1998, Tharen wanted to involve himself once again in the black metal realm, so he gave the band new life. He got in contact with Herr Wolf, who joined AMESTIGON in the winter of the same year. Only a short time later, Lanz completed the lineup. By that time, Silenius also showed interest and was invited to be a steady guest musician for AMESTIGON releases. Thurisaz left the band and joined Abigor on vocals and bass guitar. AMESTIGON produced a promotional CD with old and unreleased material in 2000, Remembering Ancient Origins, which was limited to 100 copies and sold without any professional distribution.

In 2002, Millenium Metal Music released a split CD with Hellbound. The four-song AMESTIGON part was called Nebelung 1384. In May 2009, AMESTIGON finished the production of Sun of All Suns, which was the first full-length album in the history of the band. The base is black metal in the original vein, but the songs also featured various other musical influences. Thematically, the album was very physical, located between the occult and taboo, sociopathy and abuse.

As big vinyl fans, the members of AMESTIGON are very proud that W.T.C. PRODUCTIONS will release Sun of All Suns on vinyl during summer 2015. It will include a special vinyl master, different artwork, and the bonus track "Invocation of my Demon Brother." Furthermore AMESTIGON joined the ranks of W.T.C.Productions for the release of their second full-length album, Thier. It will be released on DLP with an etching on the fourth side and on CD in jewelcase. On Thier, there is a conceptual shift to the metaphysical level. This second full-length release is all about creation, magick, and will.