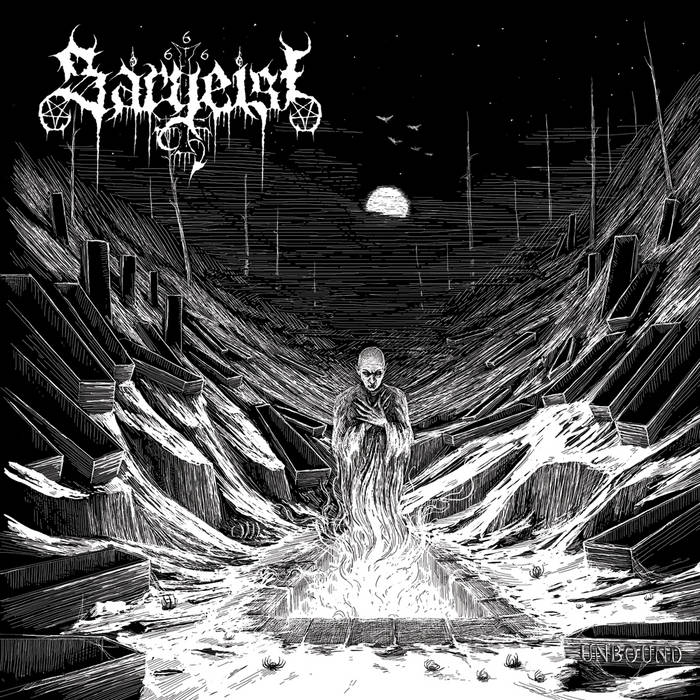 WolfGang Tortured singing, raw sound, what else do ya need for a good BM track? Favorite track: Hunting Eyes.

Matthew Kokinda In what may be their best release thus far, Sargeist has somehow managed to take old school style no frills second-wave Black Metal and created a work that somehow makes it seem new, fresh and interesting in ways that other, lesser bands are just incapable of. If you like classic raw black metal with an attitude you owe it to yourself to give this bad boy a listen or 10. Favorite track: Unbound.
more...

By now, SARGEIST require no introduction. For nearly 20 years now, the band - led by erstwhile HORNA guitarist/songwriter Shatraug, who's arguably the most prolific metal musician of that same period - have been at the forefront of the ever-fertile Finnish black metal scene. In fact, alongside HORNA, one could say that SARGEIST are the most influential band of that scene, which has gone on to influence countless other worldwide scenes in this millennium.

And while each SARGEIST full-length has been a stunning snapshot of the band's headspace during that point in time, so, too, does the long-awaited Unbound provide a poignant portrait - one of a nearly reinvented lineup, but one just as vital. Gone is the "classic" SARGEIST lineup that included longstanding co-conspirators Torog and Horns (vocals and drums, respectively). Now, a rhythm section - bassist Abysmal and drummer Gruft - who together possess a wealth of experience in the Finnish metal underground; erstwhile Nightbringer and ADAESTUO guitarist VJS, whose activities also span other bands and continents; and vocalist Profundus, who's been an incredibly prolific drummer the last couple decades, and who's lately most renown as the vocalist for Desolate Shrine.

Despite this seemingly significant change, the SARGEIST aesthetic remains resolute and unyielding - indeed, they are more Unbound than ever. Grimy yet spectral, icily melodic but burning with a desperation beyond compare, songwriting that cuts to the heart of the purest black metal but reverentially receives it blood: the SARGEIST of Unbound are a band renewed and revitalized, prepared to keep the throne they've occupied these many years through a subtle yet studied refinement. Not for nothing has this lineup been active on the live front, and upon the release of Unbound are heading out on a European tour with esteemed labelmates ACRIMONIOUS and CHAOS INVOCATION.

"Unbound" was recorded at Helsinki and Tampere, Finland,
by the coffin spirits during late 2017.
Mixed and mastered during winter 2018 at Trollhouse.
All gospels courtesy of Shatraug with the exception of
"Blessing of the Fire-Bearer" by VJS, scriptures by Shatraug and Profundus.
Cover artwork courtesy of Misanthropic-Art.
Faces of Hecate artwork courtesy of Milya Yanovskaya.
Photos and layout courtesy of Elena Vasilaki.